If you want to skin some big ​hogs and field dress ​them in the most efficient manner possible, you need a good skinning knife. Skinning knives differ from more generalized counterparts in the shape, width, and thickness of their blade, as they’ll be specially pointed and curved to make separating meat and skin easy without puncturing organs or meat. They need to be especially sharp, as animals – especially those extra big hogs - do a good job of dulling even the sharpest, hardest blade.

Get ready to draw in those big hogs and make a clean shot so you can start skinning. Read on to see our reviews and recommendations for the best hog skinning knife to buy in right now.

Buck Knives knows how to make dependable, classic knives, and this one is no different. It looks like a classic outdoor knife, with a handle of either black phenolic or dymondwood, sporting a Full Tang Construction, as well as an Integrated Finger Guard and Deep Choil that make sure it’s strong and sturdy.

The blade is made of a 420HC stainless steel, rustproof and corrosion-resistant. It’s 4” wide, with a sweeping curve and a narrow, pointed tip that makes slicing thick meat and skinning game easy, and prevents puncturing organs or skin. A leather sheath is included.

Our main complaint is the handle- it’s very smooth, which means that if it gets soaked in water, oil or blood, it becomes slick and hard to hold onto. If it had some more rubber or grip, it would feel more secure in your hand while skinning.

Overall this is an excellent, classic skinning knife with a hefty, sweeping blade and tough, full-tang construction. We’re big fans. 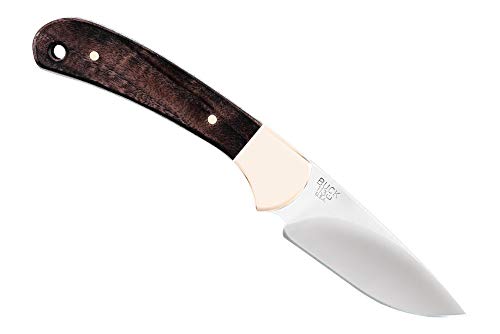 Like the Skinner Blade above, this 113 Ranger from Buck Knives is a solidly-built knife with some real classic looks. The handle is made of real walnut, with an ergonomically pleasing shape and grip. The blade measures 3-1/8", is made of solid 420HC stainless steel, with a similar drop point skinner shape; wide and sweeping, but with a blunted, downward-angled tip to avoid puncturing skin and organs. 420HC gives it the best combination of edge retention, corrosion resistance, and strength.

The Ranger is a fixed-blade knife; it measures 7.25” long and comes with a nice leather sheath that you can wear ​on your belt. It can be rapidly deployed with one hand and put back just as quickly and easily. This means it won’t close up as small as a folding-blade knife but will be that much sturdier and more solid in your hand.

One downside we’ve seen is that there seem to be some quality control issues with the handle; people have reported it showing up cracked, or for some reason, made of some wood other than walnut as advertised. So inspect it carefully on opening, and make sure it’s unbroken and what you’re looking for.

But again, this is a great, fixed-blade knife from Buck that is sharp, gets the job done, and vintage looks. 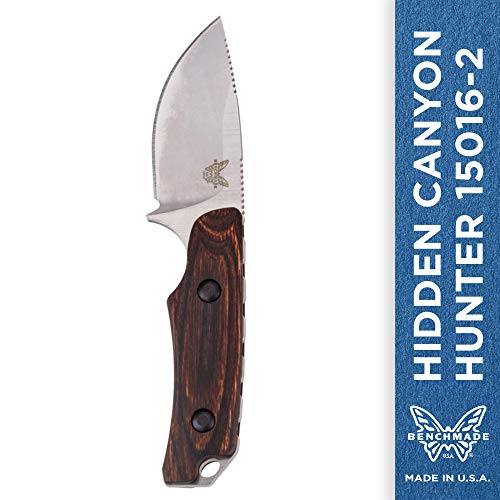 Another fixed-blade offering, this time from Benchmade. It’s compact, measuring only 6.32”, and features a handle made of either G10 or stabilized wood. The blade is CPM-S30V stainless steel, which is well-balanced, sharp and holds an edge well. As mentioned, it’s fixed, and the full-tang construction ensures that it’s rock solid.

The blade shape is a drop-point, similar to the Buck Ranger, but wider and flatter; it boasts serrated edges on top and is cut especially for hunting and skinning. And the fixed-blade design and ambidextrous sheath mean that it’s quick and easy to deploy and use.

Despite a rock-solid construction, we find the size of the knife a bit small, especially for skinning larger game. We can imagine it would be far too small for very large hogs. And apparently the sheath is junk, so be carefully about entrusting it with your knife.

But if you’re looking for a well-built, compact, fixed-blade skinning knife, Benchmade has you covered. 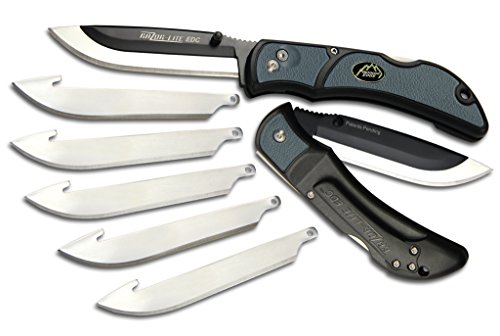 Looking for a compact, folding, razor-sharp skinner knife? This bad boy from Outdoor Edge might be the answer. It’s got 3.5” Japanese 420J2 stainless razor-blades, that have been are heat treated and hand finished, and can be switched out and exchanged at the press of a button. The blade-holder-handle is black-oxide coated and intended to provide the same strength and sturdiness of a regular knife. The rubberized TPR handles provide a secure grip and are mounted to stainless steel liners for strength. Take your pick between orange and black.

The Razor-Lite comes with 6 blades, and you merely switch them out as each one dulls. It may be more wasteful than a regular blade but is far easier and more convenient. And the ultra-thin blades are super sharp and make slicing easy.

Unfortunately, they don’t last long and don’t really hold an edge. That’s okay since you’re changing them out, but it would be nice if they lasted longer and you got more out of each. It’s also just not as sturdy as a regular knife, and it has the nasty tendency to open up in your pocket, so be careful.

But, the whole setup is very cheap, even with 6 included blades. And the blades really are razor sharp, even if they wear out quickly. A cheap, convenient way to always have a sharp blade. 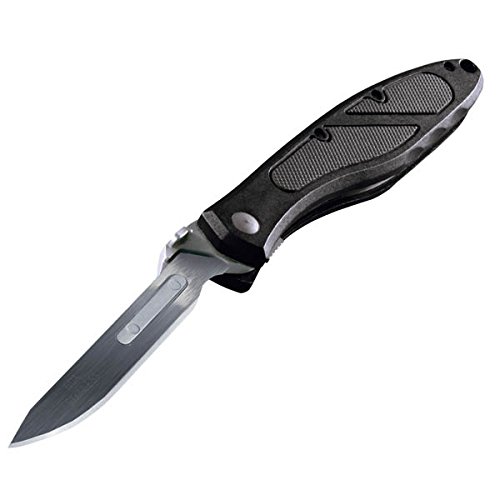 Similar to the Razor-Lite above, this folding skinner knife has super-sharp blades that can be replaced with the press of a button. It has a strong polymer handle and a blade cartridge that holds, 2-3/4" stainless steel #60A blades, and that can be replaced whenever they wear out. There are ambidextrous thumb studs, a liner-lock, and an open back for easy cleaning. A nylon holster is included, and you can wear it on either side.

Best of all, it’s dirt cheap – like the Razor-Lite – and you get a bunch of spare blades with it – 12 are included with the knife. They do wear out quickly, but replacement is quick and easy. The thin, sharp blade is good for skinning smaller animals.

We do find it a bit small for larger game, however – especially large hogs and also deer. It also requires to hands to open, and the biggest complaint: the blades just aren’t sturdy. It’s a bit wobbly, and the blades sometimes fall out while in use, which is not only annoying but very dangerous.

But like the Razor-Lite, it’s a good, cheap option if you don’t want to deal with sharpening blades. Just pop in a new one.

There are a few things which you need to consider when you are looking for a new hog skinning knife. The knife is one of your most important tools, and not all knives are created equal or are made with quality in mind. ​Here are a few things to keep in mind when looking ​for one:

Most skinning knives will be made of hard, tough stainless steel, which does a great job at resisting rust and corrosion, as well as holding an edge and sharpening easily. The harder the steel, the stiffer the blade will be and the easier it will hold an edge – and be sharpened when it dulls. If that’s too much work, you can opt for replaceable bladed knives.

Simply put, a knife’s blade is what distinguishes it from ​other, similar knives. Traditionally, a skinning knife follows the “trailing point” design which has an upward-curving blade where its point extends above the blade’s spine. This provides for an increased cutting area along the blade’s curve, meaning that significantly ​fewer strokes are required to skin the animal.

Although this is good for using on an animal which has already been opened, it can be tricky to get the initial cuts done with a trailing point blade. Instead, use a “drop point” blade for your initial cuts. Additionally, always choose a skinning knife which has a fixed blade. Folding blades reduce the size of the cuts you can make per stroke and are not as safe.

Shorter blades are best for skinning as they offer practicality. They are easier to maneuver, and you can exercise more control over them when working around joints. In addition to this, a shorter blade requires less maintenance such as sharpening and honing. A shorter blade can be used on most types of animal, however, larger animals will require longer blades. The right knife for you depends on the type of game you typically hunt.

Handle
Skinning knives come in both folding and fixed-blade designs. There are advantages to each obviously, but we much prefer the sturdiness and stability of a good fixed-blade. They feel stronger, heftier and are easier to work with. Some knives even have folding and replaceable blades.

How a Hog ​Skinner Knife Is Used

Being able to butcher a hog in the field is a valuable skill, and the best tool to do this with is a hog skinning knife.

A hog skinning knife is used to dress a hog much in the same way as a deer. A high-quality, sharp skinning knife gets the job done quickly and easily. With a hog skinning knife, the most important attribute is its sharpness; skinning an animal is quite easy and only requires 10-15 strokes if you know what you’re doing.

When you’ve hung up the animal or laid it flat, the knife can be used to open the animal’s hide and detach it from the legs. When this has been done, it becomes much easier to tear away the skin from the carcass. It depends on the animal, though.

For example, wild boars are notoriously difficult to skin because their skin is attached to its fat, whereas smaller animals such as rabbit require barely any work.

Our pick for the best hog skinning knife is the Buck 0103 Skinner Blade. It’s solid and hefty, with a fixed stainless blade and full-tang construction, a thick, tough handle, and a wide, sweeping blade with a point that makes skinning safely easy. It’s large enough for big hogs and game, and we think it will serve you well for quite some time.

If you’d like something a bit more compact, the Benchmade Hidden Canyon Hunter is also a great option; it’s much smaller and lighter, but that also means it’s not quite as good for cutting large ​hogs.

But whichever you decide to go with, you’ll be well served and on your way to skinning hogs in no time. If you have other questions, you can check out our hog hunting guide.