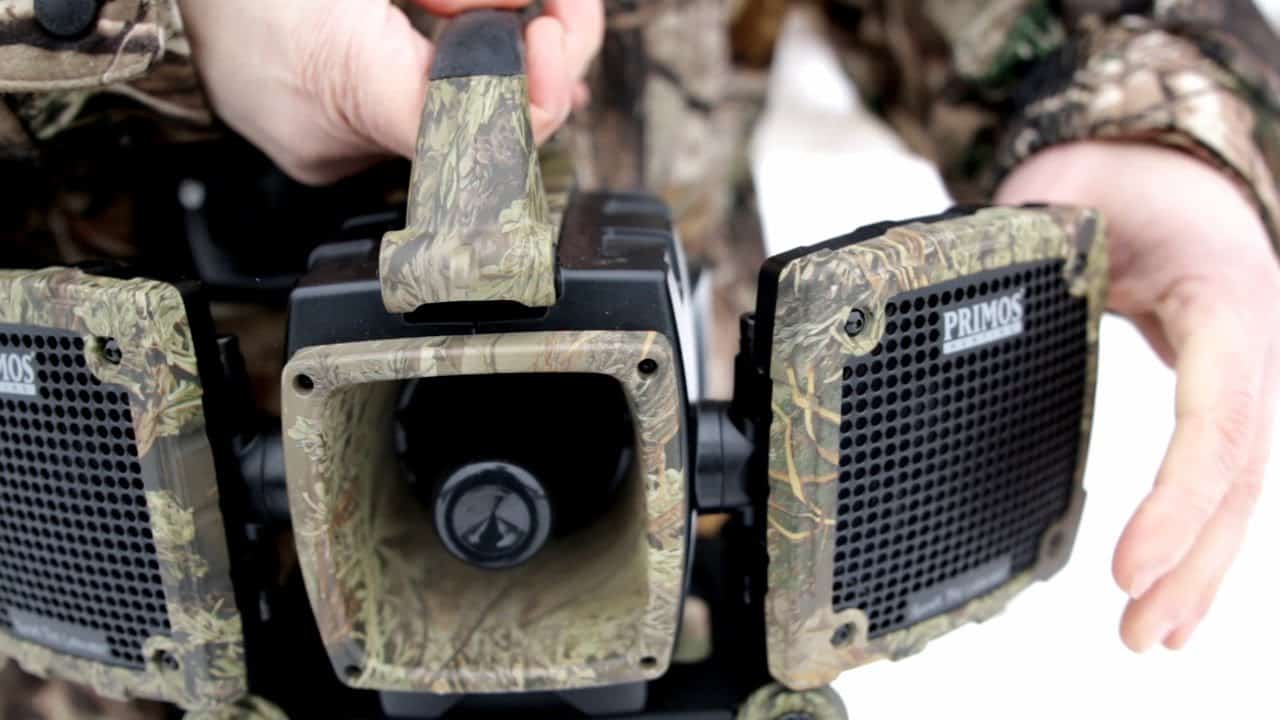 Whether you are an experienced hunter, or entirely new to the sport, you’ve probably heard that hunting predators isn’t like hunting traditional game animals. They’re more cautious, craftier, and more likely to spot an incautious hunter.

A good predator call can make the difference between a coyote or bobcat that gives you a shot opportunity, and predators that see you and leave.

Sure, with practice and care you can make a mouth call work, slowing drawing in predators to your hunting area. But even the best manual calls are less effective and won’t reach as far as a good electronic predator call.

Instead of making a close imitation of animal sounds to draw your target in, you can use the exact sounds that tell them your hunting area needs their attention. Since electric calls have multiple calls and call-combinations, you can experiment and adjust until you find the combination that works for you.

But a good electric call is an investment. It's important you get the right one. In this article, we'll talk about 5 of the best electric predator calls available for 2019. We also included a buyer's guide and FAQ at the end, so you can be confident in your choice. 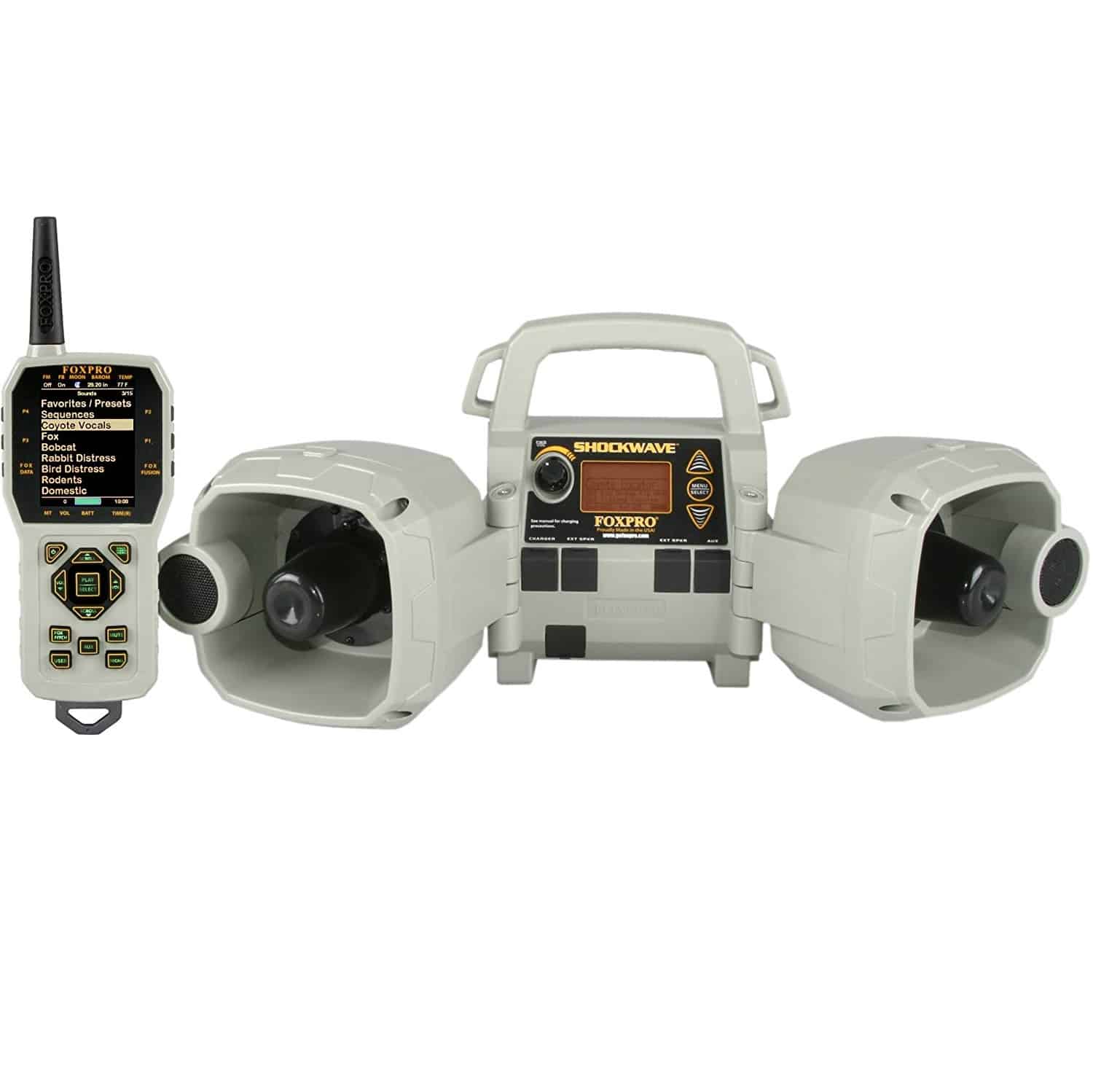 FoxPro talks a lot about their calls’ ability to bring in foxes, after all, it is in their name. But, this advanced electric call system comes pre-loaded with 100 different calls. Between them, there's almost certainly a call for every situation and predator.

This call comes pre-built with 2 speakers, 2 tweeters, and 2 audio jacks you can use to hook up additional speakers if you want.

Few hunters need the extra volume from those audio jacks, however. This call has some serious volume. The batteries last long enough for up to 7 hours of continuous use. You can also change the pitch and frequency of each call, customizing them for better results in your specific area.

The call also comes with moon phase indicators and barometer readings to help you fine-tune your hunt.

Since you have a 1000 sound capacity, you can also download or record your own local call sounds to use with the Shockwave system.

Hunters love this call. It’s volume and sound-fidelity (the accuracy of each call to the real thing) make this among the most effective callers out there.

The computer system can be a little tricky, but the user’s manual is comprehensive and explains how it works.

Most customers also report that FoxPro as some of the best customer service in the business. If you do have a problem, they’ll work with you to fix it and make it right. 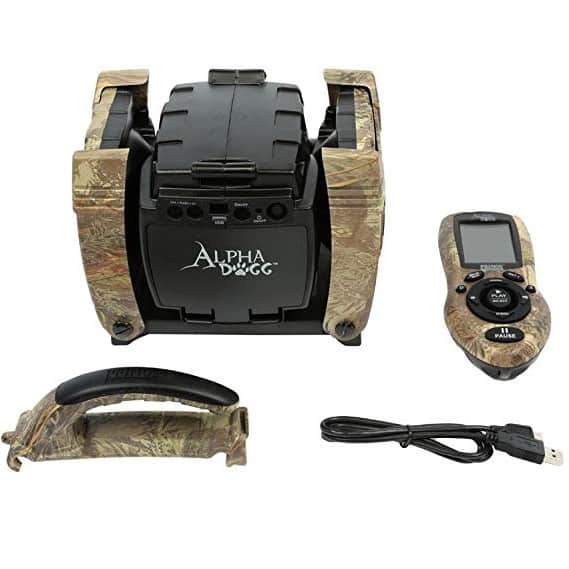 The Alpha Dogg is another well-designed electronic predator call. It's not only meant to effectively reproduce animal calls but also to hold up to the natural wear and tear of being carried and used hunting.

Like the Shockwave, the Alpha Dogg can hold up to 1000 different sounds on its internal memory. You also gain access to a professional library of animal calls with this device. It also has in and out audio ports, a port for the addition of a small mobile decoy, and one of the better electronic call remotes on the market right now.

The Alpha Dogg is pre-loaded with 64 different calls when you take it out of the box. The calls are played through 2, 80-degree, cone speakers. The speakers can also rotate up to 180 degrees each. You can choose between 360-degree sound coverage, or focus the sound in a single concentrated area.

While the Alpha Dogg doesn’t come with a tripod, its designers thought ahead and included the threads for easy installation of a tripod. That gives you more options for the position, and range, of your electronic caller.

Overall this is an electronic call almost all users can get behind. It’s effective, versatile, and has a large storage capacity to customize your call library. Some users do report sound distortions at the highest frequency and volume levels.

But, even the slightly distorted sound still works well to bring predators, particularly coyotes, into your area. 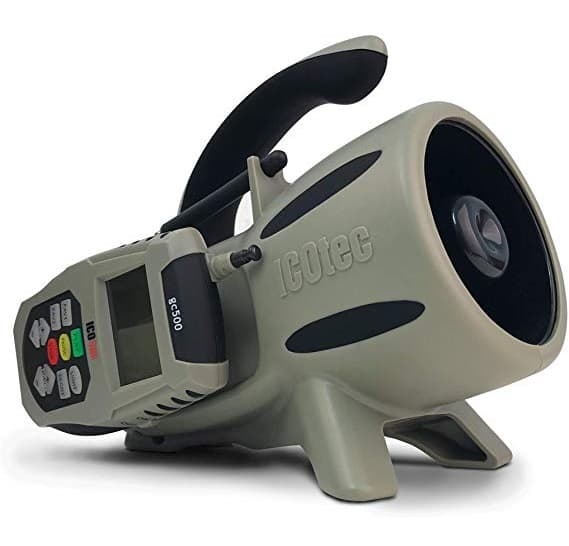 The Icotec Gen2 500 is a fantastic mid-range option. It has one of the longer ranges for an electronic game call, coming in at 300 yards. However, since it has a single speaker, higher volumes that reach a larger range will be more distorted than on an electric call with more speakers.

It also comes with more pre-programmed calls than most electronic calls. It’s loaded with 200 unique calls right out of the box. You can also select up to 8 calls as favorites, making them easier to select and use.

You can program and make adjustments to your call library as needed.

This call also has an easy to read screen with a built-in night light, making it easier to see and use during night hunts.

This mid-range electric call system offers some important performance points that make it an effective option, if not quite as versatile as some of the other calls on the market.

The biggest complaint with this call is that programming is difficult. However, that’s a common concern across most electric calls, so that alone shouldn’t scare you away from this one. 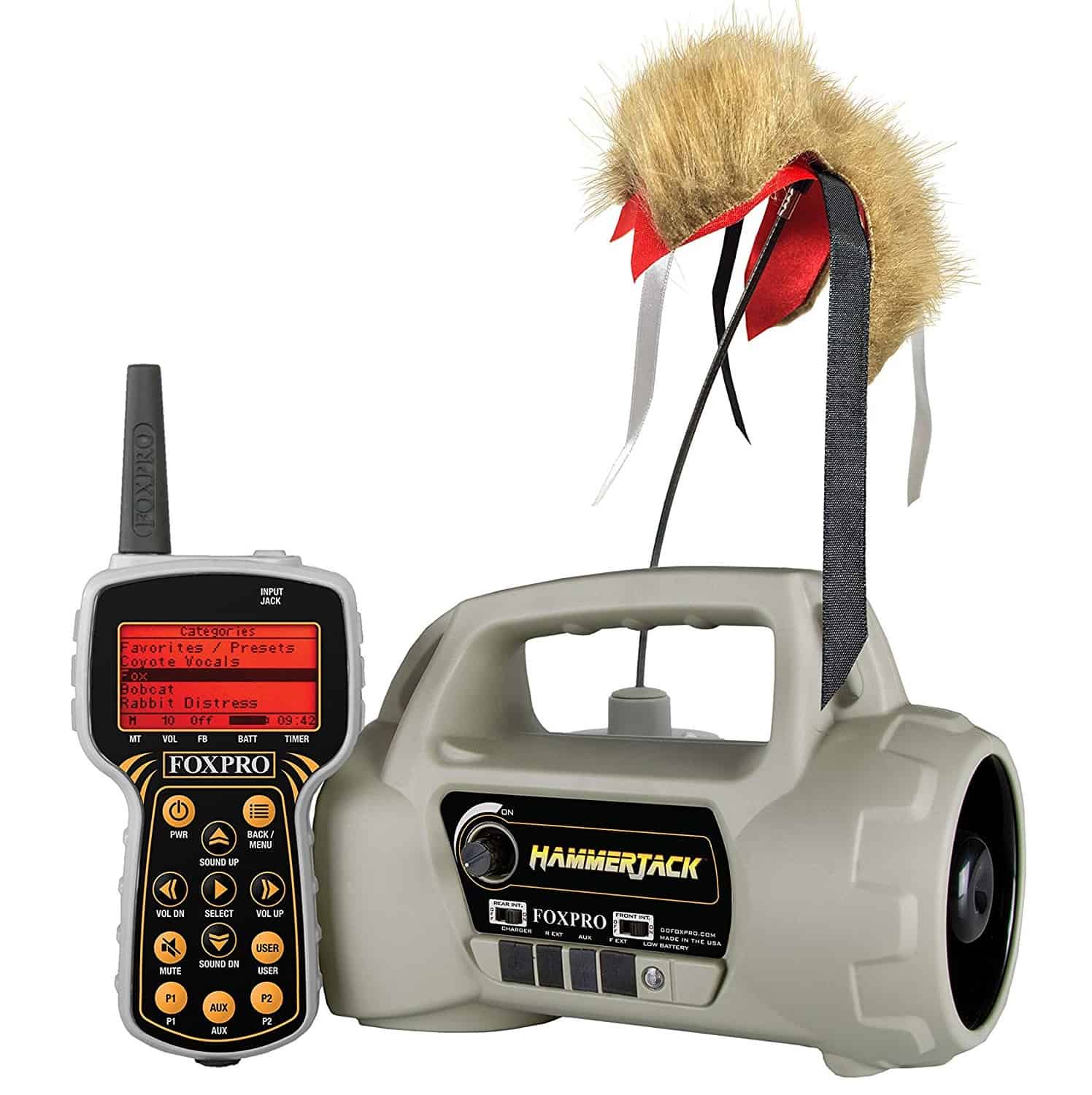 The HammerJack by FoxPro is another mid-range call system, although a little more expensive than the mid-range options from either Icotec or Primos Hunting.

Like their more premium systems, the HammerJack has the FoxBang system, which will immediately change the call played to a pre-selected option after hearing your firearm discharge.

While the dual speakers on this system aren’t as flexible as either the Alpha Dogg or the Shockwave, they still have impressive volume and good sound quality.

This remote also doesn’t seem to have the problems that plague the Shockwave’s remote system.

Although the decoy is designed for foxes, this call has an impressive performance record for bringing in coyotes and other predators.

This is one of the more popular electric calls out there. It balances cost and benefit well and is hard-wearing enough to withstand long-term use. It also has high success rates and brings in a lot of different animals.

It may be in part because of the lower price point, but this caller also receives fewer negative reviews overall, indicating better customer satisfaction. 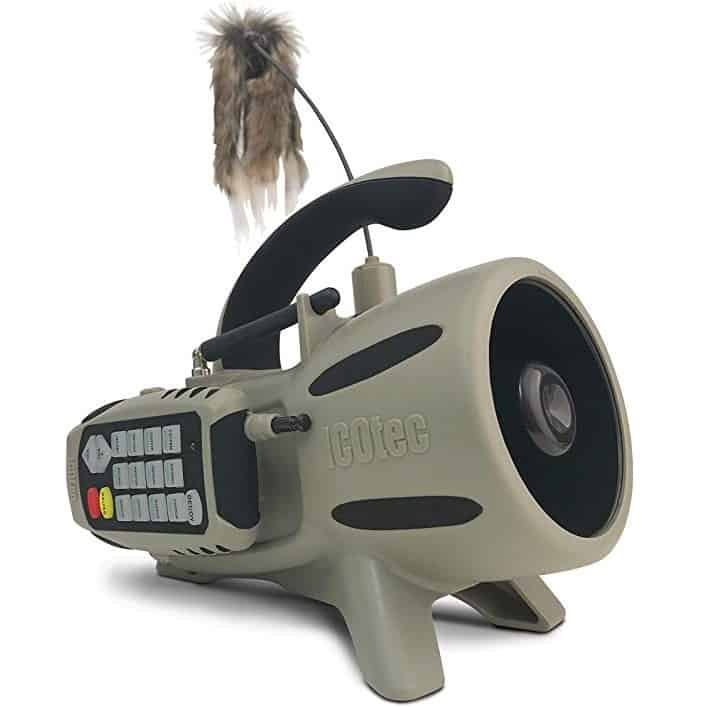 The Icotec 320 is a step above their entry-level call but still priced for easy affordability. This is a good caller for entry-level hunters. But, it's effective and versatile enough to be used by experienced huntsmen as well.

This model comes with a small decoy, a call pause button, a single speaker, and a remote with day and night lighting.

While the single speaker means that this model has the same sound distortion issue as the 500, that doesn’t detract much from the overall effectiveness, just your comfort using it.

Hunters who use this call are pleased with its effectiveness and generally say they would go back to Icotec for their future electric caller needs.

Its generally considered a great call for the money. It works, it has good battery life, and if it isn’t the most comfortable for the hunter’s ears that isn’t the end of the world.

Whether you go with one of the callers on this list or decide to research a different model, there are some important things you should consider before you spend your money.

Higher-end predator calls have programmable features that allow you to download new calls, and even customize or combine existing calls. This is a useful feature for experienced hunters since it gives you more direct control and variety in your calls, but it may be less important for new hunters.

Your range largely determines the number of animals you might attract. There will only be so many animals in any given area, so the larger your call range the more animals will hear it.

The biggest advantage in an electric caller is that the sound of the calls is more accurate than you can reproduce with plastic, wood, or metal calls. Even using only your mouth you won't truly mimic the sounds of an actual animal call.

Sound quality makes a big difference. Distortions may not scare animals away, but the more convincing your sound the more animals will come to see what’s going on.

Multiple speakers and speaker position can also make a big difference in overall sound quality. Two or more speakers will better capture both the range and resonance of any given call.

Batteries are one of those things you want to set and forget. But there are few things more frustrating than having an animal approach, only to run away because your batteries died, and the call suddenly stopped.

Most caller batteries start at 4-6 hours of life, but you can potentially get significantly more active time out of a more efficient caller. Good callers will last 6-12 hours, easily.

1. Where should I set up my electric caller?

Placement depends a lot on what you’re trying to hunt, and the environment your hunting in.

You don’t want the call to sit in your pocket or next to your blind. Instead, try to put it in the middle of your primary shooting area. That way, the coyotes and other animals will be drawn straight into where you have the best chance of getting a good shot.

Giving your call a height boost, with a tripod, a tree, or even a small rise in the land, can boost the range of the call. If you’re concerned about not reaching enough animals, try an elevated position.

2. How Often Should I Vary the Call I’m Using?

This is somewhat up to personal preference. Generally, run a single call for 5-10 minutes, take a break, and then switch to your next call. It also depends on how long you plan to stay on one stand.

If you only stick around 30 minutes (since coyotes are more likely to come early in a stand) you’ll want to play each call for a shorter duration, that way you can try several different calls to try and spark interest.

3. Will The Same Call Work All the Time?

This is a common rookie assumption. The calls that worked last time you went hunting aren’t necessarily the calls that will work the next time.

Think about what the animals need for the time of day and season you’re hunting. If coyotes are likely to be hungry, for instance, they’ll be more likely to respond to the distress calls of smaller easy prey animals. Even fawn distress can be helpful if the coyote thinks that the fawn is separated from its parents.

If you change where you hunt, you should also take that into account. Calls that are unfamiliar to the animals in an area aren’t as effective as calls that mimic the sounds they already know and expect. Try to stick to what naturally lives in the area you’re hunting.