A good shooting stick, which can come in the form of a tripod, bipod or trigger stick, will take your coyote hunting to the next level. By giving you something to rest your rifle or crossbow on, they let you get the perfect, most accurate shot at all times, aiming quickly and easily thanks to their swiveling heads. They’re also usually portable and easy to move around, and once you’ve tried one, you’ll never head out predator hunting without it. Whether you hunt coyote during the day, or at night, there's a stick out there for every style.

There's a lot of different rests out there on the marketplace, so we've gone ahead and simplified picking a good model for your predator hunts. Want to see for yourself? Take a look below for our reviews of the best shooting sticks for coyote hunting.

​Reviews of the Best Shooting Sticks for Coyote Hunting​

This Gen 2 Tripod from mainstay hunting brand Primos is an excellent, quality shooting stick for all different kinds of situations. It expands from 18” to 38” with a single of the trigger, only one hand necessary. Flip the switch and it stays in that preferred position. Good for both kneeling and standing. It has a detachable, 360-degree V-yoke for resting your rifle, and you can attach other items such as cameras, spotting scopes, binoculars, laser range finders and almost any other mono pod mountable device if you see fit.

The legs are made of lightweight but sturdy 7075 aluminum, legs adjust very smoothly, and fold out to some extreme angles for very low shooting. It’s a solid, quality set of shooting sticks for just about any situation.

But we find the height just a little bit too awkward; it’s too tall for sitting, and just too short for standing – especially if you’re tall. A very in-between height. We’d love to see it go just a few inches lower and higher.

That aside, it’s a great tripod. The build quality is apparent, and we expect it to last quite some time. Our pick for the best coyote shooting stick. 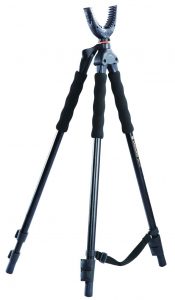 This is one versatile and heavy-duty shooting stick from Vanguard. It functions as a tripod, bipod, and monopod in one package, made from heavy gauge aluminum alloy. There’s a soft foam, contoured hand grip and anti-slip rubber feet, and the U-shaped yoke with rubber fins swivels in a circle so you get the perfect shot every time; you can use it for rifles, crossbows, or remove the yoke and add some attachments.

Pick this thing up, and you can feel the quality. We say that a lot, but something about the Quest really stands out; the aluminum really is heavy-duty, but it weighs in at only 2.2 pounds altogether. Max height is 62” – as tall as the Primos Gen 2 Jim Shockey – and it's minimum is 27.5”.

Only downside? The yoke falls off easily, so be extra careful ​not to lose it in the field. And unlike most of the others, it’s a bit tall to shoot from while sitting, at 27.5”.

Otherwise, we honestly believe this is one solid, hefty shooting rig that will serve you well. You can choose from three setups, shoot whether crouching or standing and is light enough to carry around with you everywhere. Our Pick for the best budget buy.

Verdict: Best for the Money

The Gen 2 Jim Shockey is the big brother to the regular Gen 2 Tripod above, and we’re big fans. Like the regular Gen 2 trigger stick, it expands and shrinks down with the single pull of the trigger, and locks into place, using only one hand. There’s the removable 360-degree V yoke, and compatibility with binoculars and rangefinders. And it’s got the same smooth, elegant and durable 7075 aluminum legs.

The big difference between the two, however, is that this one goes almost twice as tall – from 24” to 62”. That’s a full two feet above the Gen 2’s 38” height, making it even more applicable and useful for shooting while standing up.

The only drawback to this is it’s just not as good for shooting while sitting down, as it’s even taller. And we find the legs bang around quite a bit; the rubber strap that is supposed to keep them together fails at this, and they also seem to rust internally when water gets in. And the rubber feet fall off easily. Which is too bad seeing as how the build is otherwise.

But barring these cons, it’s a fantastic, versatile and very high-quality shooting stick for those of us needing tall tripods and lots of heights. 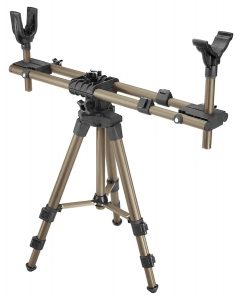 This solidly built shooting stick is a bit different; it two rests for the best accuracy and stability you can get. This also means you can use it for both gun and crossbow, with spots for both the stock and the forend. The top uses a Tension adjustable rotation and tilting for fast target acquisition, and the legs can expand from 20” tall to 42” tall. That’s a perfect height for sitting on the ground, or for sitting in a chair – but not for standing.

A cool feature of the DeadShot Field Pod is the cast aluminum hub system, which allows the gun rest arm to pivot and swing for getting the most accurate shot on the fly; the rotation is tension adjustable and tilts up and down to make aiming simple and easy.

Unfortunately, the height is terrible for standing – way too low. So if you don’t have a chair and don’t want to sit on the ground, you’re out of luck. And at 6 pounds, it’s heavy and very large; that may not sound like much but makes transporting it around the field is a bit cumbersome.

But, it’s real solid and super easy to shoot with; if you’re planning on sitting in one place, the pivot and tilt are fast and make aiming at targets very quick. If you’re gun only weighs a few pounds, it’ll work well.

A quality, but affordable option. The Bog-Pod SB2 has three-section legs made of aluminum, with a matte black finish and ABS plastic head and leg connectors. The universal shooting rest can swivel 360-degrees and has a thick rubber padding to protect your rifle and barrel. The legs loosen and tighten quickly with the rapid-adjust twist lock.

The SB2 adjusts from 21" – 40”, which is a good height for sitting and for kneeling, but not for standing (we’re sensing a theme here). One cool feature not found on other models is that you can pop off the rubber feet to get carbide tips for when it’s icy out.

One gripe we have is that the legs don’t always stay in place when fully extended; they’re a bit wobbly and close up if you put too much weight on it. And this tripod is so light that it has a hard time with heavy rifles. And the clip that holds the legs breaks easily.

But, it’s not a bad choice at all for a budget option. Lightweight and easy to shoot with.


What To Look For In A Coyote Shooting Stick

​This is very important. You want an adjustable stick that can be set to your preferences, whether you’re sitting, standing or kneeling. Ending up one with in-between those heights can be awkward and limiting. So pay attention to how tall it goes, and make sure that matches up with how you see yourself spotting and shooting the target.

​Many tripods and trigger sticks will have a y-shaped or u-shaped shooting yoke, which allows you to rest your gun and aim comfortably. They are also often coated in rubber for grip and stability; this is an awesome addition. Some will even have an entire shooting arm, with a rest for both stock and barrel.

​Most of the shooting sticks we’ve selected ​above are made of aluminum, some heavier than others. Aluminum is good because it is sturdy but weighs practically nothing; you don’t want to be lugging around a heavy, large tripod, so avoid any made of steel. Or alternatively, plastic, which doesn’t tend to be as strong or as light.

One thing which has coyote hunters divided is the bipod vs shooting stick argument. Whilst many professionals swear by using a bipod, we think that shooting sticks are much better for a number of reasons. They can also be used for a variety of weapons and are not restricted to use on a small number.

Bipods can get very, very expensive. In contrast, you can make your own shooting sticks or pick one up from most department stores cheaply. In fact, if you’ve got an adjustable bar stool at home, you could quite easily use that. If you’re not looking to spend a whole lot of money, taking some time to source your own shooting stick provides all the benefits for a fraction of the cost.

They Provide Everything A Bipod Does​

​In fact, when comparing the stability provided by a bipod or by shooting sticks, there’s barely any difference. With shooting sticks, you get all the stability you could possibly need, again, at a fraction of the price. In addition to this, you can easily adjust the height of your shooting stick, it doesn’t attach to the weapon, so you can stand up, sit down or kneel without having a bipod dangling off the bottom of your rifle and they enable your rifle to pivot freely and easily. With a bipod, you only have a fixed degree of movement and they can be overly restrictive.

​Being able to stand up, sit down or move around at a moment’s notice can mean the difference between hunting success and failure. With a bipod, if you have to suddenly stand up, it will be left swinging, and this can seriously detract from your accuracy and reduce your freedom of movement. With a shooting stick, nothing is attached, nothing is in your way, and nothing requires part of your attention.

​​Ultimately, there's pros and cons to both predator shooting sticks and bipods. There's no right or wrong option, experiment with both to find out what suits your style of coyote hunting.

Our choice for the best shooting stick for coyote hunting is the Primos Gen 2 Z Tripod. This model has a lightweight-yet-sturdy aluminum build, a removable, 360-degree shooting yoke, and can telescope and lock into place with a single hand; just pull the trigger, adjust the legs to your like, and lock in place with the leg-lock. It’s an excellent, versatile pick that doesn’t break the bank. For a budget buy, we’d suggest checking out the Vanguard Quest, which is super light (2.2 lbs), and can function as a coyote shooting tripod, bipod or monopod – three stands for the price of one. And it’s cheap.

Anyone of the models in our reviews above is more than capable of doing the job, just select the stick that is best for your style of ​coyote hunting!