How Well Can A Deer Smell? - Catch Them Easy
0

How Well Can A Deer Smell?

In deer hunting, when it comes down to it, it's not about what a deer can see, though that still is important. It's all about the sense of smell. A hunter can be camo'd head to toe, absolutely motionless in his stand and poised to fire, but if that hunter has whiffs of last night's dinner on his breath or whatever fresh mountain breeze laundry detergent his clothes have been washed in, the chances of actually killing a deer are significantly diminished.

As you prime for your next hunt, it is therefore of the utmost importance that you put scent control on the top of your list of priorities, especially if you're looking to come home with more than a few stories of getting busted.

What's the deal with a deer's sense of smell and how good is it anyway? To start, unlike humans for whom the dominant sense is sight, deer rely on their olfactory strengths above all to gain understanding of their surroundings. Because of this, a deer's sense of smell is obviously more finely tuned. Humans have about 5 million smell receptors, while deer have a whopping 297 million. To put this in perspective, this makes the smelling abilities of deer even more acute than those of dogs, who have around 200 million scent receptors.

Deer also have a ​vomeronasal organ (secondary scent gland) located on the roof of their mouths called Jacobson's Organ. This organ allows them to sort out smells that come in through the mouth. If that weren’t enough, deer may even have smell receptors on the outside of their noses.

To process all of the information that comes in from these millions of glands, deer must devote a lot of brainpower. Though a deer’s brains is much smaller than a human's, a much larger portion of it is devoted to understanding and categorizing scent. To be precise, the portion of a deer's cranial mass used for processing smell is 9 times larger than a human's and is so large that it is divided between two portions of the brain.  With so much space devoted to smell, it shouldn't be surprising that a deer's brain spends more energy processing odors than on any other activity. That's a big deal.

How does this affect the hunter? With their super-smelling abilities, it is hypothesized that deer can smell things from over a half mile away. That's the equivalent of almost 9 football fields. When was the last time you caught a whiff of something that far away? Never. Even a faint wind can enhance their abilities to an even higher degree. Don't think that setting up downwind is the final answer either. Keeping a deer upwind of you is definitely a wise idea, especially as a deer's smelling can be compromised by the wind, but their noses are still powerful enough to pick up on the unprepared, no matter where you set your stand or cover. 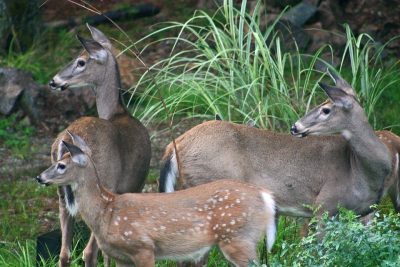 Deer can also pick up trace amounts of chemicals in concentrations as low as one to two parts per trillion. To go back to our field analogy, for a bit of context, let's say a football field has 140 million blades of grass. In this scenario, if even one blade was dipped in a chemical formula, a deer could still smell it.

Speaking of chemicals, deer can also pick up what you are feeling. When you're anxious, excited, or even fearful, you emit pheromones which are chemical compounds excreted by the body that give off a communication signal of sorts to creatures nearby. That feeling of excitement when a deer finally comes into your sights? Keep it in check. Pheromones can tip off a deer that something foreign is in their midst and it's threatening. As for how well deer can pick up pheromone scents, a buck has the ability to pick-up-on doe pheromones up to a mile away. With this in mind, it'd be advantageous to stay as stoic as possible when hunting if you don't want to give yourself away.

Is there anything that can affect a deer's powerful nose? The weather plays a role. When the weather is cooler and drier, their sense of smell is hindered slightly. This is partially because molecules travel more slowly in cold weather. While your scent may not travel as quickly, keep in mind it will linger longer where you've been. Additionally, in very cold weather, any moisture in the air freezes and with it, smells are also trapped. Under these conditions, a deer is less likely to be able to pick up on a hunter's scent.

Dry weather can also play a role. Deer's noses require moisture in order for molecules of scent to stick to them. The drier the air, the drier a deer's nose, the less likely they'll pick up all those molecules. This might be part of the reason that you see deer licking their noses so often. In humid weather, on the other hand, deer have the advantage. Water molecules (which there are more of in humid weather) can trap scent and in doing so, can enhance their potency. Moreover, in hot and humid weather, these molecules move more quickly, meaning the likelihood of your scent making its way to a deer's nose is higher. 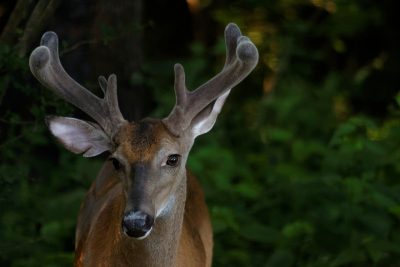 Such high science may be more confusing than it is helpful, but it's important to remember the take-away that no matter how cold or hot it is, a deer's sense of smell is still about 10,000 times better than a humans. No sniff test should lead you to believe you're scent-free nor can any attempt to rid yourself of any human smells convince you that a deer won't smell you coming. When it comes down to it, these creatures will almost always be able to pick up human scent.

That's not to say you won't be able to bag one anyway. Successful deer hunting is all about diminishing your smell, even if you cannot fully erase it. One way to do so is by using only scent-free detergents and cleaners for your clothing. Keeping hunting clothes clear of places they can pick up heavy human scents (restaurants, gas stations, etc) is also a good idea. Furthermore, antibacterial soaps can aid in limiting the amount of odor-producing bacteria on the skin. Make sure to keep those scent-free too.

One surefire way to lessen your smell is by using scent eliminating spray. A number of scent maskers on the market have been tested and shown repeatedly to significantly reduce the potency of human smells. By using scent maskers, in combination with some of the other methods above and an understanding of the wind, you’ll be one step closer to a successful season.